Coming Out Is Hard to Do

As they say, coming out is hard to do.

I don't really regret going public with my problems - it's an important part of my effort to do good where before I did bad - but it takes some getting used to. For example, today at the bank a woman came up to me who had read my blog. Given my small town, it's not as unlikely as it sounds - probably half the town knows by now. And she offered nothing but support. But it was still, how can I say it - embarrassing? Surprising?

As my friend Justin Paperny says, you have to own it and not let it own you.  If you try to hide it all away like a desperate, awful secret you will not only drive yourself crazy but prevent others from learning and benefiting from your mistakes. I'm a living, breathing symbol that crime does not pay. With that in mind, I decided to design a couple of t-shirts. I'm not sure yet whether I will actually order them, much less wear them. I'd love to hear from you about whether you think I should, or any other ideas that may come to mind. But this is about the most public way of coming out that I can think of.  My point in this post is not to make light of what I've done or crime in general, but to demonstrate the stigma attached to crime and my struggle in opening up.
So without further ado: 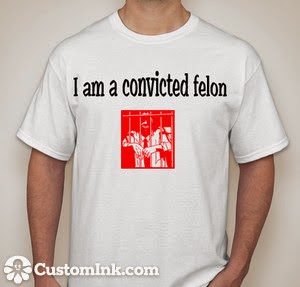 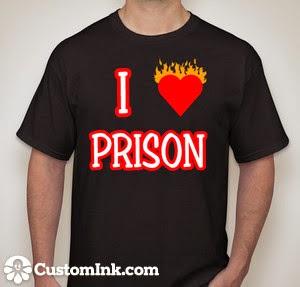