One inncocent prison Sunday, in late August 2014, I was going about my weekend activities - yoga, guitar playing, writing my next blog post on the RDAP prison rehab center I had just transferred to - when I heard a voice on the loudspeaker ordering me to the program director's office.

My heart did a pitter-pat. Being called to his office was never good news - this wasn't a benign rehab program like Betty Ford where you'd be overjoyed at the privilege of meeting the director - but being called in on a Sunday was extra unnerving. The programming staff didn't work weekends so this meant, what, he was interrupting his day of golf and relaxation to come talk with little ol me?

I quickly changed out of my weekend 'grays' into my formal 'greens' and hightailed it to his office, knocking on the closed door. "Come in," a voice intoned.

When I entered my heart fell to the floor - not only was the RDAP director sitting there staring at me with a frown on his face but so too was the camp warden, known by inmates as "The Shark." They didn't ask me to sit so I stood there warily glancing about the room as they exchanged glances. I could just see the director's computer screen from my position and, OMG, what was that he was looking at ----- my blog? 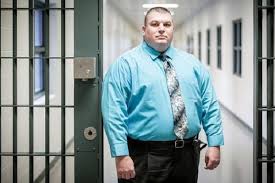 "You're quite a writer," the Shark told me with a sneer. I had heard this in my past life as a compliment but his tone and expression made clear he thought the opposite.

"We've been reading your blog," said the program director in a squeaky voice. "You're sure lucky you didn't say anything bad about my RDAP."

"But you said bad things about my camp!," said the warden. "I can't have this! You've gotta stop this immediately!"

I'd sort of half dreaded/half expected this moment, and had carefully researched my prison rights before coming to prison. The bottom line was that the Supreme Court had ruled in favor of inmate's freedom of expression, including writing and blogs, as long as it didn't endanger prison security.

"I'm sorry if there's something you don't like," I said, "It's just my perspective. I didn't mean to offend anyone but I have the right to write even as an inmate."

"Including the right to only speak when I tell you too! You know what we could do to you? Do you have any idea? Take you out of RDAP for one, make you lose your year off, send you north where you'll be shoveling snow at 4am, send a guard over to turn your locker and bed every god damn morning and evening, put you on a BoP bus to nowhere, put you on a chain gang! Do you hear me?"

"So what are you going to do?" he asked.

"You don't know?" he yelled. "You don't know? Do I have to put the fucking words into your mouth? You're going to stop this god damn blogging, be a good, quiet inmate and do your time in silence. Got it?"

As I walked out of the office the RDAP director called after me: "You're sure lucky  you didn't write anything bad about my RDAP program."

I went back to my "home" and flopped down on my bunk. Inmates swarmed, wanting to learn what happened so they could fuel the inmate gossip mill. I was too upset to talk. I think it was the unsubtle reminder of the pure powerlessness of being an inmate. What was I going to do, fight for my rights and lose the few little things I had left, the chance of seeing my kids? Losing the year off that RDAP dangled in front of me like a pot of gold at the end of the shitshow?

At the same time, blogging meant so much to me. It was my fragile connection to the outside world, the one-bit of normalcy in my life. Every morning I waited in anticipation for the few minutes I'd have at the e-mail computer to dash off my next missive to be posted by my mom and sister. It was also my therapy, my way to vent about life here and get the frustrations out of my system.

Still, the choice was clear - no more blogging. 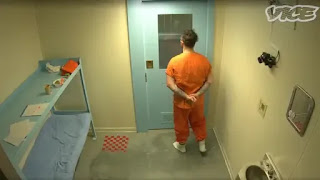 Several days later, I was at my job in the chow hall slaving away over a huge pot of boiling hot dogs when the kitchen guard came up and said I'd been paged to the warden's office. What the fuck? I'd stopped blogging!!!

I trudged over to the van stop that would take me to South Camp where the warden's office was located my mind swirling. What happened? Is this about the blogging? Had he read a post he really didn't like? As I walked, lost in my worries, I didn't notice two prison guards walking toward me until they grabbed my arms, twisting them behind my back. They then led me to a white, windowless van, threw me up against the side, put handcuffs on and then shoved me inside.

A few minutes later we pulled up to the maximum security prison, a dark, scary, barred prison straight out of central casting. Guards rushed out, dragged me inside and slammed me into a cell. A few minutes later they shoved an orange paper jumpsuit through the slat in the door ordering me to dress. The jumpsuit was marked on the back with two big black letters - SU.

Though I didn't know why, I knew what SU meant. Segregation Unit.

I was being put into Solitary Confinement.
Posted by leighsprague at 7:36 AM