After several hours of sleep in the backseat of my car in Fort Kearny, Nebraska, I awoke shivering and with a terrible crick in my rear where the seatbelt buckle had made a permanent indentation. I opened my bleary eyes and tried to focus, confused by a vivid dream of 4th of July fireworks. The car was so cold I could see my breath underneath the sleeping bag. After the night on the road I had hoped to sleep beyond 8 a.m. Was it the cold that woke me? I glanced about in a daze and the noise - that sound of exploding fireworks from my dream - sounded again. I peeked out from underneath the sleeping bag and, to my dismay, found myself staring up at a uniformed officer with his nose to the glass. I clambered up as quickly as I could - at least I had slept with my clothes on - and exited the car. I brushed feebly with my hand at my hair and tried to straighten my shirt, which had twisted in the night. 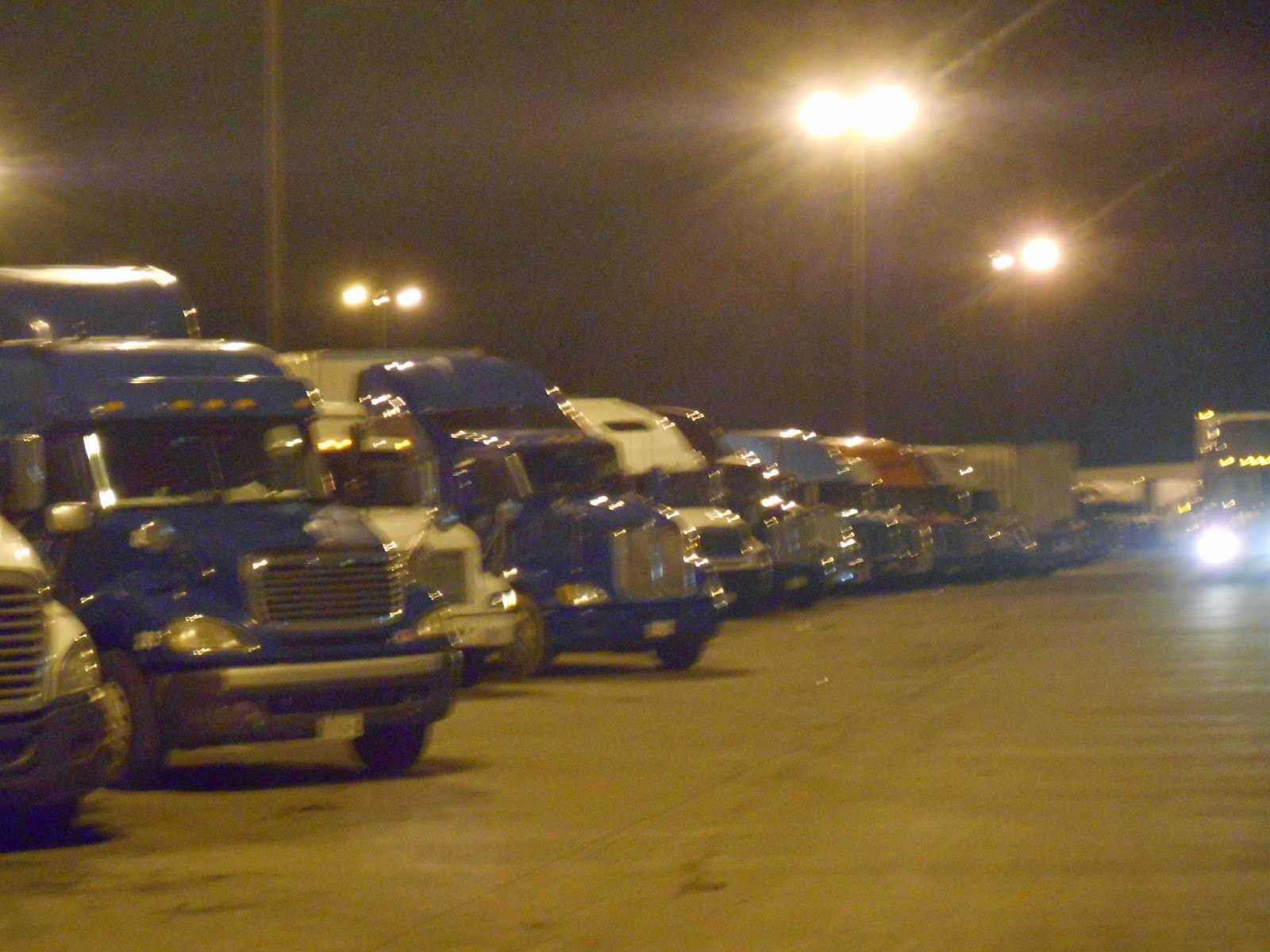 A truck stop in the middle of the night. Contrary to myth, truckers actually stop to sleep.

"Yes, officer?" I asked. Panicked thoughts that I had unwittingly broken some terribly important local law tumbled through my mind. I had already prepared myself to become an inmate in federal prison but not the local jail in Fort Kearny, Nebraska.

"You're blocking the trucks," he said in a clipped Midwest twang.

"What?" I looked over his shoulder and saw three semis lined up on the small road on which I had parked. I suddenly realized that what to me had appeared at 4 a.m. to be an empty field was actually a dirt lot that led to some sort of factory about half a mile away. Thinking it was a turnout, I had parked my car directly in their path.

The officer frowned but I thought I could detect a faint smile threatening to emerge. "Next time you're in town," he said, "I would appreciate it if you would just park in a parking lot. Or get a hotel room." 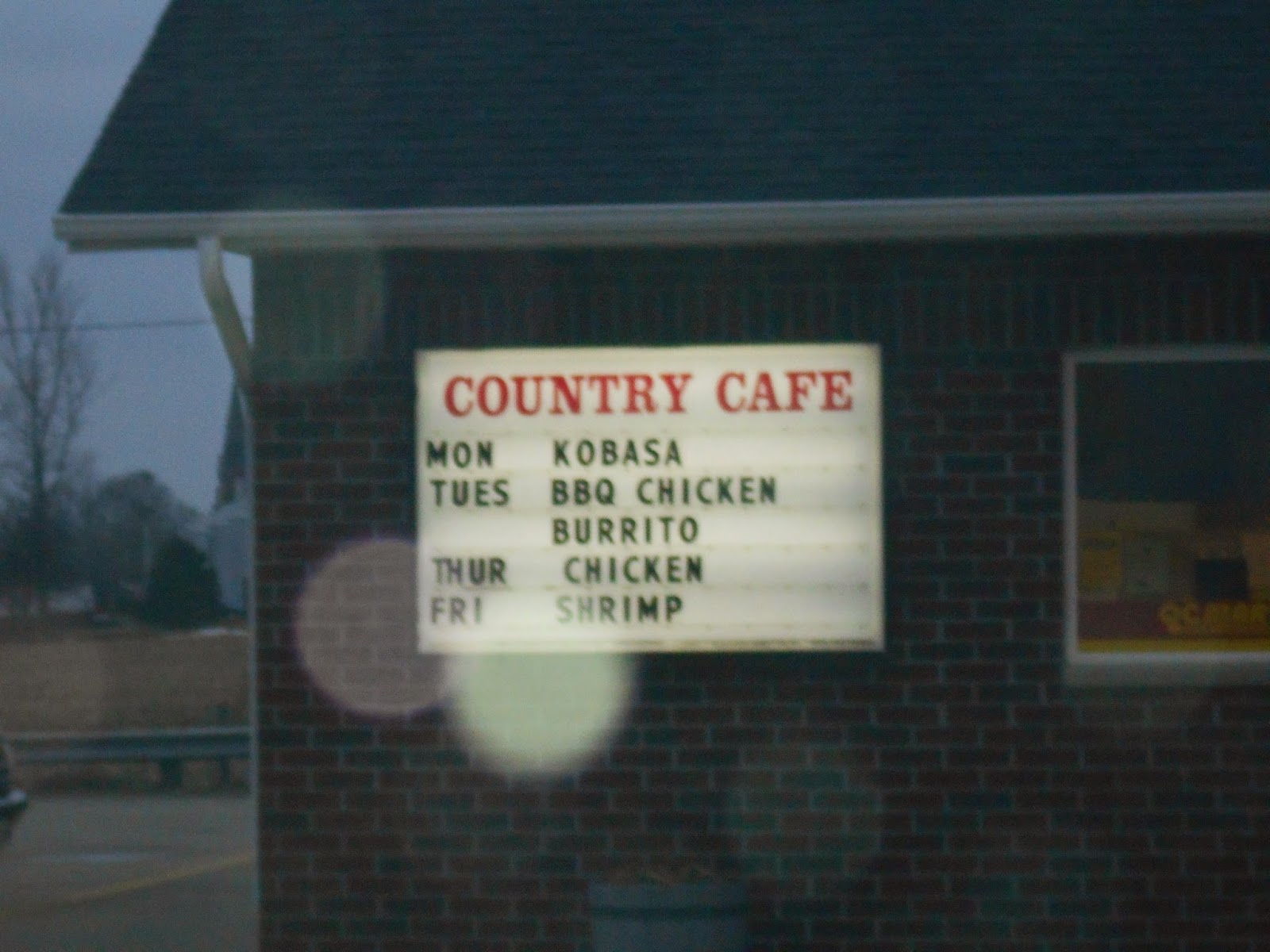 Any idea what "kobasa" is? It wasn't Monday so I couldn't find out.

After that little adventure I set off down the road. I groaned to myself as I thought about another entire day behind the wheel. But before long I was once again in the zone.  The day passed surprisingly quickly, with stops for gas every 200 miles the exciting highlight. Without this road trip I would be sitting at home, upset, nervous and stressed. At least driving gives me something to do to keep my mind off of what awaits. I also feel as if I'm doing some good: I am giving my household goods to family members that will really be able to use them.

Embarrassingly enough, I almost ran out of gas two times that day in those flat, empty spaces. The thought terrified me. In my defense, the gauge in my truck moved slowly down to 1/2 a tank and then shot with increasing velocity from there toward empty. I was also not used to these vast spaces, where 100 miles between towns is considered a hop, skip and jump. Out on the plains you have to plan far ahead for the next pit stop. 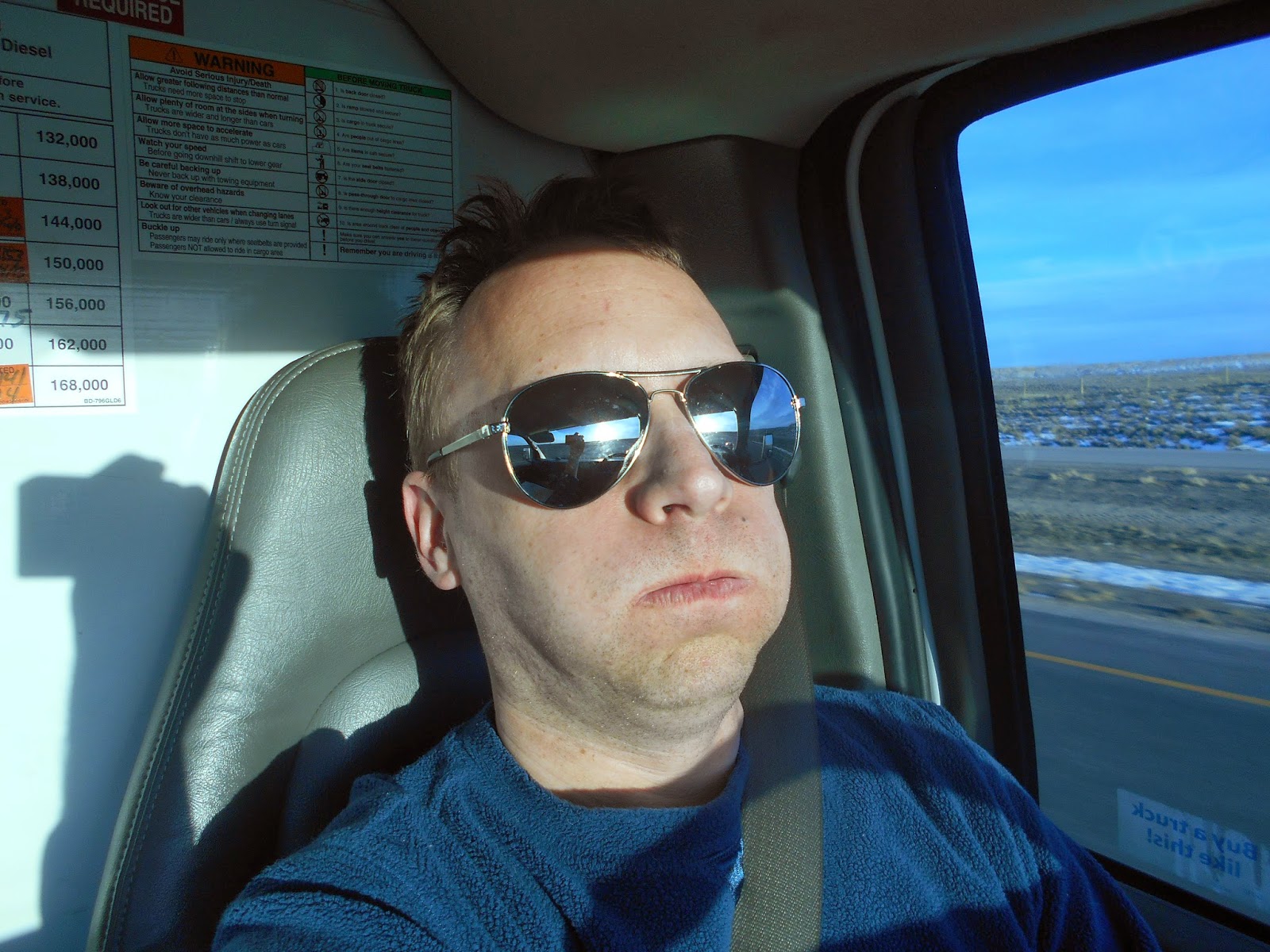 Those who have only flown over the Midwest between California and New York tend to assume that all the states in the middle are pretty much the same. I can tell you with certainty that they are not. For example, in Wisconsin as you drive you will see field after field filled with black and white cows. In Nebraska, all the cows are solid black. Do you know why? I do. Don't ask me their proper name - Guernsey? - but in Wisconsin the cows have udders and produce milk. In Nebraska, the cows are not cows at all, but bulls. They're raised for meat.

The spaces are also different out there on the plains. Where Wisconsin is hilly, Nebraska is flat, so flat that the wind gusts in frightening bursts and you can see for miles and miles in all directions. It makes me feel lonely, as if it's just the truckers and me in an otherwise empty world. At one point the only radio reception was for a country station and a religious talk show.  Later that day, as I approached the border with Wyoming, I happened upon a local program called the "Grocery Hour" in which an old woman read on air what sounded like her grocery list. "Peas, 99 cents, ham, $3.45 a pound, Crisco, $4.00."  At first I thought it was a joke, but her voice sounded serious and she continued on and on. She was still talking about groceries when the reception faded twenty minutes later.  Don't ask my why. 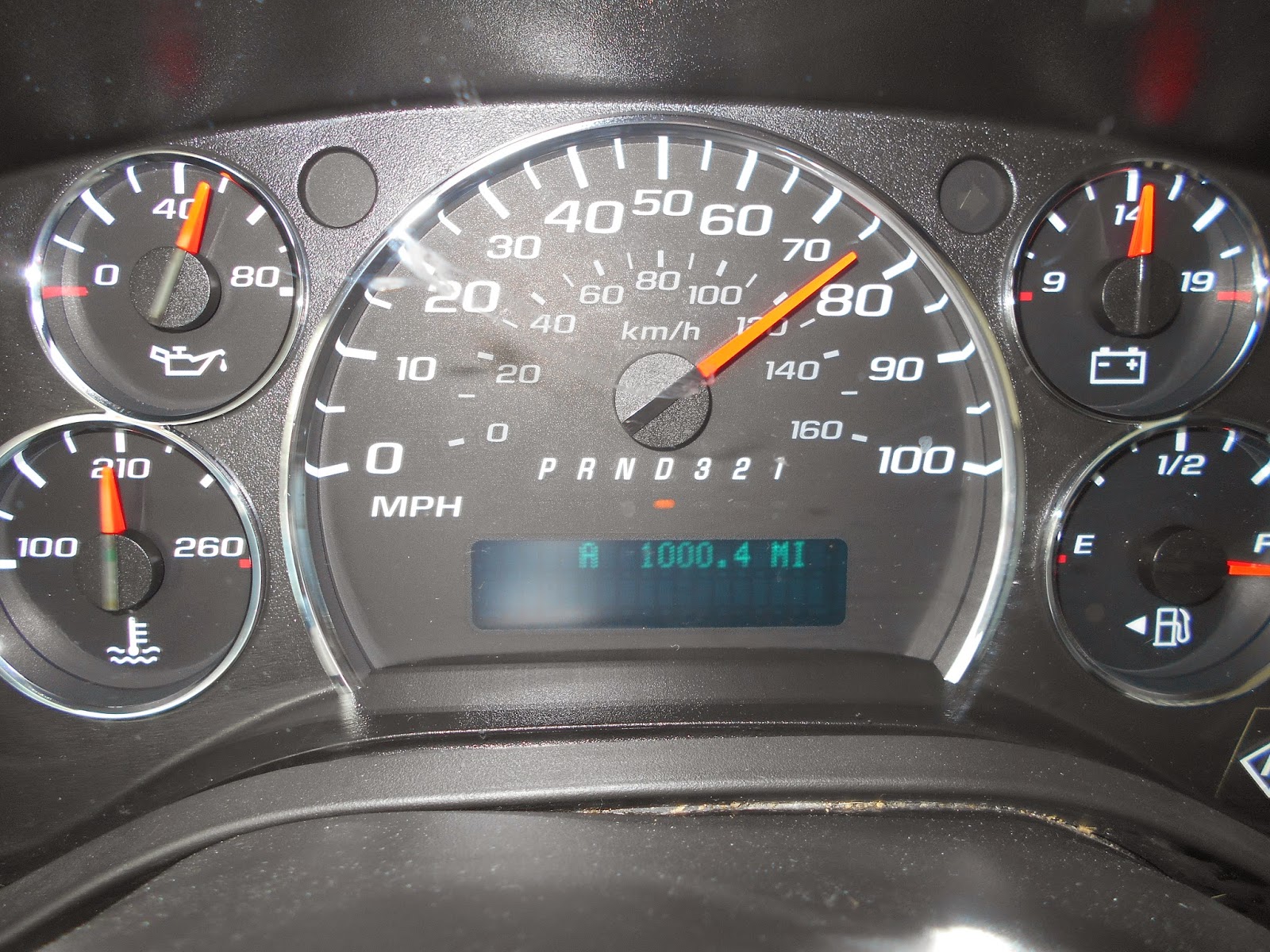 After a while, the towns and fields and states began to blur together. I just kept going and going and going, amazed that our ancestors could have traversed these forbidding spaces in their covered wagons. It's not that I was enjoying myself, exactly, but it was better than the alternative of sitting at home and waiting. I fell into the mindset of running a race. This wasn't a vacation and I knew where I had to be by Monday come hell or high water.  I just wanted to get to the finish line. In that one day, I traversed over 800 miles through Nebraska, the edge of Colorado, Wyoming and on into Utah. No more pictures, no more stopping to see the sights, which is a pity in a way because the wilds of Wyoming are beautiful in an austere sort of way. I crossed the continental divide, time zones changed, I inched through the Rocky mountains, my truck's motor screaming: my only stops were for gas. I just wanted to get past those vast empty spaces that lay between me and my sentencing hearing. Late Thursday night I pulled into an Ikea store in Salt Lake City, Utah, and slept, for a change, in the cab of my truck. 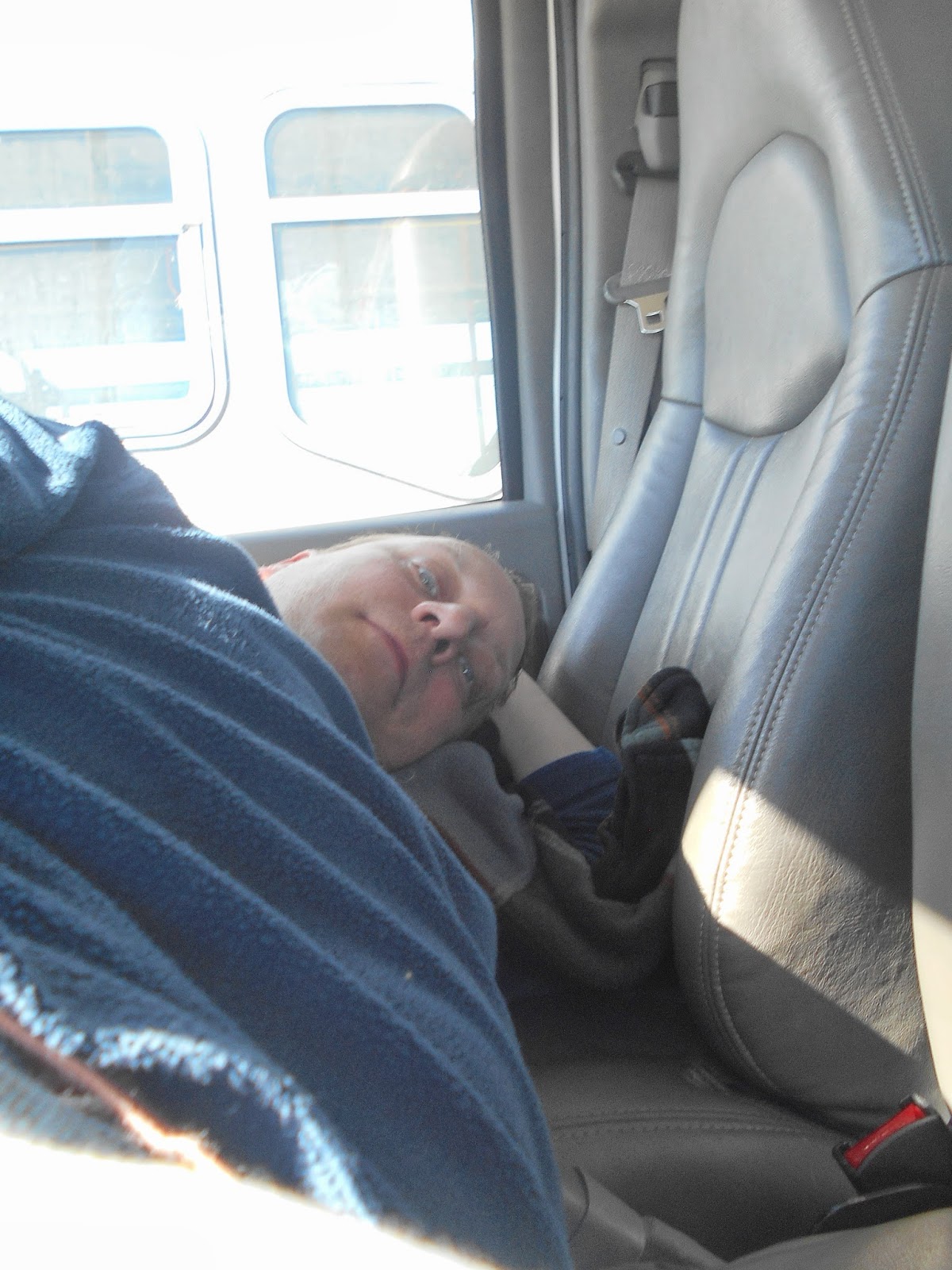 Asleep in bed.
On that long, empty day alone in my truck, without even my radio to keep me company, I began to get lonely. I enjoy solitude but this was a little much, even for me. I was missing the daily Skype sessions with my children that anchor my day.  Thankfully, Walt Pavlo, who I've mentioned before, called to cheer me up in advance of the hearing (until the telephone reception went out once and for all). And I talked with truck drivers - for whom I have a new appreciation - at the various truck stops where I stopped to fill up. They make surprisingly little money doing a job that's actually hard- I'm pooped after 3 days on the road but they do it all the time. They have a vibrant subculture and wouldn't trade their jobs for anything. I even showered together with some hulking specimens of humanity at a stop that had advertised its "real marble showers" on billboard after billboard for at least 100 miles.  They didn't live up to the hype.

Despite these distractions, I began to think obsessively about what awaits in San Francisco. As the miles ticked by, I crafted endless paragraphs in my head about what I could say to the judge when it's my chance to speak to properly express my feelings about what I've done. By the end of the day, I had probably an hour's worth of heartfelt remorse and contrition worked up - I've hurt a lot of people - which was a problem because I should only speak for several minutes, if that.

That's more than enough for now. Tomorrow I will recount the last leg of my journey around the Great Salt Lake, across Nevada and on into California.
Posted by Unknown at 3:01 PM