The Curse of Empathy

I have always been blessed (or cursed) with an overabundance of empathy.  For whatever reason, I can look into someone's eyes and get a pretty good sense of what they are feeling.  I can't read minds, mind you, just understand what emotion a person happens to be feeling at any given time.  I then - and this is where it gets confusing - adopt their feelings as my own. If they happen to be happy, than I am happy. If they are sad, than I am sad. 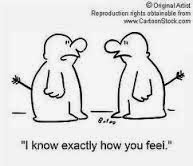 My best guess is that this is some innate quality, not something I learned or developed.  As a child, I clearly remember reading emotions in my toys.  I was often fearful for them, afraid they were upset.  If they were jumbled in my toy box I would neatly arrange them so that they would be comfortable.  I was appalled when other kids beat or broke or threw their toys, certain that they were crying beneath their plastic. This quality expanded as I grew, shifting from toys to animals - pets, strays, any animal, really - and then to people.  As a result, I've gone through life as if walking on egg shells, bombarded from all sides with emotions that demand my attention. While this ability makes me a more caring, compassionate person, the truth is, I would gladly give it up. It is a tremendous distraction, even a hindrance.  Instead of thinking about my feelings, I think about everybody else's. In my experience - in our society - this ability is often more of a curse than a blessing. In our dog-eat-dog world, it is unfortunately much more conducive to success to consider the emotions of only one person in the race to the top: your own.  How far would Frank Underwood get, after all, if he stopped to consider others' feelings at every turn?

This view of empathy as impediment was compounded by a misguided choice of profession: I became a lawyer.  Honestly, I don't know what I was thinking.  I should have become a therapist or a psychiatrist or a novelist, professions where my ability to empathize, to understand others, would be useful and valued. Instead, I entered a profession where empathy was a crippling disadvantage.  As a lawyer it is helpful to be able to read minds.  But what you need to do is divine a person's inner feelings and then turn them against the person and use them as ammunition.   For example, as a lawyer if you are sitting across the table from someone who you deem to be vain, or pompous, or insecure, you pounce on those 'weaknesses' and manipulate them to your own ends.  This I was never able to do; it is the antithesis of empathy.

The one instance where my empathy failed me was in my commission of the crime - stealing from the oligarch. Somehow, I was able to get past my empathy as a result of my hatred for the man. In short, I demonized him thus justifying my actions in my own mind. I didn't think about his feelings at all. So here's one example, at least, where empathy would have done me good. Unfortunately, it deserted me just when I needed it.

That is why, facing prison, I am so concerned. I suspect that, as in law, empathy is also a terrible impediment in the lord-of-the-flies world of prison.  In prison, as far as I can tell, you must be tough, focused, worried only about Numero Uno - yourself. I wonder whether I can be calculating enough, tough enough, to tune out the despair and frustration and anger that I'm sure will surround me.

I'm not sure that I can do that.

And that is what scares me.

[To be continued from behind bars.]
Posted by Unknown at 10:40 AM