I shuck my one dirty old pair of sweats like an old cocoon, garb my towel, bar of soap and bottle of Prell, and head down the hall to the shower in my white t-shirt and briefs. Not to brag about my hygiene but it's a daily occurrence: I've made this very same walk each day since I arrived at this place. The only difference? This time I'm wearing a new pair of gray underpants - the long kind somewhere between boxers and briefs - I'd just bought at the commissary instead of the standard baggy white prison-issued boxers. 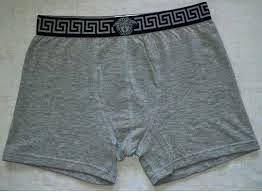 I enter the bathroom and smile to myself: the line, often long and incredibly slow (the subject of a future post), is mercifully short. Only one guy stands in front of me, a short, heavily-muscled dude with a shaved head and skull tattoos. In other words: nothing out of the ordinary. I stand behind him minding my own business when he turns toward me, invading my space. I take a step back.

"Your first time?" he barks.

"First time what?" I answer. 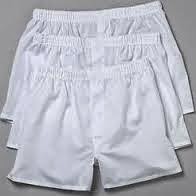 "Prison, man, prison," he says, a sub-current of derision in his voice. For those on the outside who might think that being in prison just one time is actually a good thing (or at least better than being here many times), think again. Once here you quickly learn it's bad, at least among a certain subset of the population, to be a newbie. There's a pride taken in having served and returned for more, or having served at some point in a high-security joint. It means you know the ropes. That you're a real man.

"Fuuuuuccccckkkkk." He grunts, looks away. "Figures," he adds after a moment in a derisive voice.

"Look at you, man. Have some respect. Cover yourself up. Unless you want it, that is."

I'm dumbfounded. With my long t-shirt and long boxers the only protruding skin is from my knees down and neck up. "What are you talking about?" I ask, already hating this conversation. When will those showers free up?

"Yo, dude, you gotta wear some shorts man. Those who've really served time are gonna think you're offering something, strutting your stuff. Are you available?"

I can't believe it. Really? Go to a small, Midwestern town, as conservative as they come, seek out the local golf club, and you will see every single man in the locker room engaging in much more risque behavior. 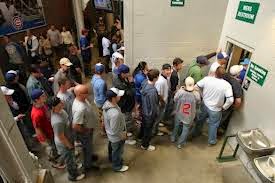 "What about the white boxers?" I ask. "Are they ok?" I wonder whether I've been telling the world for the last six weeks that "my stuff's" on offer.

He doesn't answer. "Yo dude, jus cover yourself up. Wear some shorts."

Another guy walks into the bathroom to wash his face and addresses my "instructor". "Yo dude, wassup?"

I hope to God that I'm not the cause.

TO BE CONTINUED TOMORROW

Posted by Leigh Sprague at 1:20 PM