Red is the New Orange

Watching Orange is the New Black in Prison

A bus drives down a narrow blacktop road through parched fields filled with dry grass and scrub. It's still early - around 7 a.m. and there are no other cars on the road. The bus turns left onto a dirt road, kicking up a cloud of dust as it drives toward a square, corrugated-metal barn-like structure in the distance. The barn is surrounded by a chain link fence, behind which lies a large gravel lot filled with cranes, tractors, piles of chipped wood and gravel. Visible from the windows of the bus are a family of ground squirrels, including several tiny babies with upstretched tails. 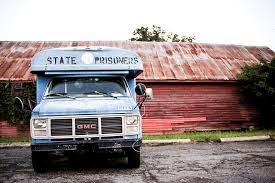 The bus pulls to a halt in front of the barn.  The bus doors open and 15 or so men in red jumpsuits emblazoned with large white letters shuffle out. The letters spell "FEDERAL INMATE". Some of the luckier men, with the latest fashion in jumpsuits, also have black letters above the white that spell "CAUTION: FELON". The men trudge single-file through the gate, enter the barn and plop heavily onto two old couches and a scrum of discarded chairs scattered haphazardly around two old tables. The usual morning disputes ring out: "Yo, you're sitting in my spot." And: "Who the fuck's been poking around in my locker?" And: "Who touched my shit? Where's my shit?"

Some men begin to grill bread on the skillet, some to make coffee. But most stare glassy eyed at the TV in the corner as one man - always the same man, mind you, our designated movie picker - fiddles with the DVD player. Soon, the screen lights up and Piper Kiernan and her motley assortment of prison-house friends appear. The men come to life along with her, cheering and laughing as the scenes unfold. The experience is decidedly interactive, as the men cheer loudly at the particularly raunchy girl-on-girl scenes, boo the guards and nitpick about the details.

So begins another day for the cons on the weed whacking team.

The above is a brief description of my place of work, the barn where I spend my mornings and afternoons in between bouts of weed whacking. Not exactly what first comes to mind when you think of prison, is it? Little supervision, out alone in the middle of nowhere, no phone, no one around. Last week, we even found a large rattle snake inside a box. One of the cons bravely chopped off its head with a shovel. When I can, I take a nap inside the cab of a huge green crane. 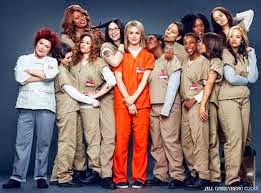 But the purpose of this post is not to describe work but to mention the decidedly bizarre experience of watching Orange is the New Black from behind bars with other prisoners. A few of the more recent inmates and I had already watched bits and pieces on the outside. Most have not. For them it's a revelation. For me, it's almost more entertaining to watch their reactions than the episodes themselves.

This group can be a demanding lot, finding fault with little inconsistencies, unrealistic plotlines, inconceivable actions. The first item of note are the little details they got right: the ID cards (white and orange with black letters), the pillows (dirty white with blue stripes), the drab institutional look of the place (decade-old paint, cinderblock), the uniforms (ours are green, not orange as in the show, but the general shape and fit (or lack thereof) are the same. So no quibbles there.

The guards are also surprisingly realistic. In fact, we have identified a specific matching guard for each of the guards in the show. Scary. In a few cases it's a stretch, in a few others the similarity is eerie. It's like playing a bit part in an episode of Twilight Zone where you're watching a life parallel to yours unfold onscreen.  Of course, some of the more risky sexual behavior of the guards is quite farfetched, although I suspect that when you have male guards in a male prison the possibility for misbehavior is diminished. But when it comes to weirdness and peccadilloes, my view is that we actually have the TV show beat. 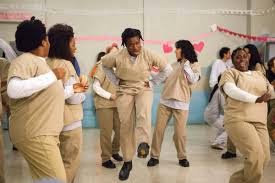 The problems come in around the edges. The prison building itself on the show is quite a bit nicer than ours: the rec room, all the inside areas to hang out. I couldn't imagine that our minders would ever actually let us hold elections, as happened (to decidedly mixed results) in the show. All the dancing and fights and screaming and searching for chickens are also very unrealistic. My favorite comment from our barn: "Yo, dude, what's all this chicken shit?" In second place: "Man, that Piper, I don't get it. Which way she swing, to the chicks or to the dudes?"
Posted by Leigh Sprague at 2:39 PM