The Politics of Television

Braving the TV Room in Prison
I squint over a sea of heads at a tiny screen 15 feet away as a mini slave strangles a mini horse and then looks meaningfully into a beautiful mini-princess's eyes. Just as they are about to kiss the room erupts into a raucous cheer. I look around. Have I missed something? Then I realize that I'm the only one watching the movie. Most of the other men have their eyes trained on a vicious, knock-down kick-boxing fight taking place on the screen to the right. "Kick him in the balls," someone yells. A few others are watching a reality show on the screen to the left about a naked man and woman dropped onto a mosquito-infested island. "She's not hot at all," someone calls out in disappointment. 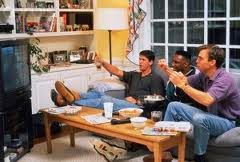 A night out at the local cineplex this is not; this is movie night Lompoc style.

I'm braving the TV room for the very first time (with the help of my bunkie - I'll get to that below) and am quickly realizing that television in prison is way more than casual entertainment. What it is is a huge deal fraught with politics and tension with a constant Darwinian struggle over who will watch what, when it will be watched, and from which vantage point. So let me set our television scene: 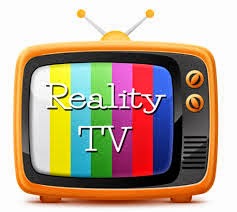 Lompoc camp has not one but three - count 'em, 3! - television rooms. But calling them "rooms" actually gives them more dignity than they deserve. And the word "television" is a bit grandiose for the small, decrepit boxes that beam our shows. The most visible room is not a room at all but an outdoor lean-to set squarely in the middle of the camp open on three sides to the elements. This is where the newbies go if they want to watch TV. There, two televisions sit propped on listing wooden shelves to the right and to the left of a very loud ice machine and microwave. Inmates drag their chairs from the bunks and prop them atop a slab of concrete as they try to see the screen on the other side of a constant stream of inmates walking to the ice machine and microwave. Cats crawl about their legs. Yesterday, I even saw a raccoon pass by in search of popcorn. The television room for newbies, although there seats are relegated to the very back, in the gravel outside the lean-to where you get wet when it rains.

Then there's the black boys' television room which I will not describe in detail because - for obvious reasons - I rarely go there. But I've learned from my Chinese friends that, for whatever inexplicable reason, one of the sets in that room is set aside for the Asian inmates at camp. It's just that when they go there to try to watch it, there's nowhere for them to sit. And heaven forbid they try to change the channel.

Finally, there's the cracker room adjacent to the chapel reserved for - you guessed it - good ol' white boys. This is where I sat watching the movie described above, a flick entitled Pompeii and certainly one of the worst movies ever made. But I was only there thanks to the sharing nature of my long-term bunkie who ceded his "spot" to me for the evening. 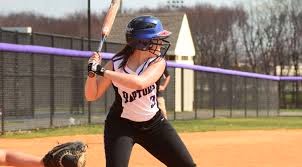 You see, every square inch of this and each of the television rooms has long-ago been "claimed" by previous inmates. What may look to you and me like an empty linoleum floor is to an experienced con actually a carefully demarcated landscape of various territories more complicated than a map of the Balkans. So heaven forbid that a newbie come in to watch TV. Wherever he sits, wherever he stands, other cons will vigorously enforce the borders, yelling at him to get out of so-and-so's spot. If he's lucky, they'll let him stand at the door. But if he doesn't happen to like the reality show or boxing match that happens to be playing, tough luck. Only a few, extremely privileged inmates - the very oldest of the old timers - have the right to select the channels. 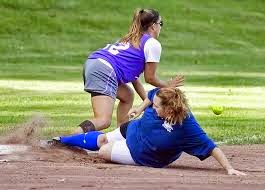 And what do they choose? Let's just say that reality shows of all stripes are a particular favorite, especially if they involve scantily clad women. Boxing - an incredibly vicious form of the sport that I'd never seen before last weekend - is a close second. But the absolute favorite, the one program that cuts across all ethnic groups, races and economic levels is (drum roll please): women's' softball. Yes, you heard me right. Every evening in each and every one of the TV rooms you will find scores of inmates glued to the TV as girls in braids and tight pants throw big balls at each other and hit high fives.
Posted by Leigh Sprague at 10:54 AM