I stood before a giant steel rack at least 7 feet tall filled with trays, each of which was filled to overflowing with a dripping, oozing mass of chicken parts. Blood and viscera dripped from the trays to the floor, which was slick with shards of fat and feathers. To my right bubbled an enormous metal pot filled with a gurgling witches brew of blood, guts and drumsticks. My job was to manhandle each incredibly heavy tray from the rack to the pot. Once I dumped the parts and filled the pot, I was to thrust my arms up to the shoulders into this gunk to separate the half-frozen parts.  Next I was to drain the blood, which gushed from a drain in the pot over my boots, take a huge plastic oar, and stir the chicken as it basted in the goop. 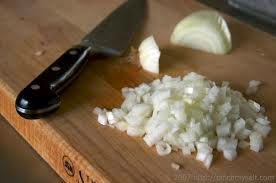 Now, I know from recent experience that I can happily chop onions all day: the relentless crying is not really a reflection of my inner state. I can mop the entire chow hall. Twice. For an inspection that never materializes. I can even clean toilets, scrub the grease pit, dump garbage cans and heave 100 pound bags of spuds. All with a smile on my face. Or at least not a grumpy frown. But with the chicken let's just say that the smile was strained. I couldn't help but think of how I was doing all this - at 4:30 in the morning - for a paycheck of $12/month. I couldn't help but think of my past: of my hated high school job de-boning frozen chicken at our town's Kentucky Fried Chicken.

My mood was so poor, my smile so strained, that the lead cook, a gruff and bossy fellow inmate with a communication problem, noticed my state. "What's wrong?" he asked abruptly.

"Nothing," I muttered, wincing for a moment before plunging my arms back into the blood and guts. 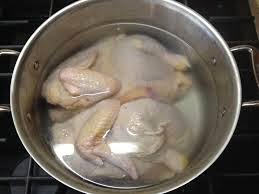 The cook turned to leave, or so I thought. Fine with me. Every exchange with him, no matter how minor, turned into a confrontation. I grabbed the oar and made ready to stir. Instead, he whipped back around and barked, an inch from my face: "You had a maid, didn't you?"

I looked at him in surprise, unsure how to respond. My first thought was what the f--- does that have to do with anything? That's pretty much how I responded.

"Answer me," he grunted, his voice rising.

This went on for a few, relentless minutes. Finally, unable to take it anymore, I pulled my arms from the muck and walked to the back of the kitchen, grabbed a broom, and pretended to sweep. As my anger cooled and the blood congealed on my arms I considered the exchange. Where I had seen myself as a justifiably (or so I thought) disgruntled employee unhappy with doing what was objectively a very shitty job that reminded me of a past I did not like, my colleague, or so I surmised anyway, saw a spoiled white collar criminal "too good" to do the work. That many of the other inmates - white collar or not - would not do that work either was beside the point. He saw me in a certain light colored by his background and mine. In my self pity, I had failed to consider that point of view.

The fact is that this happens often in prison. I'm not judged by who I think I am but by certain outward trappings: the color of my skin, my education. Certain stereotypes then come along with those assumptions: that I come from a privileged background (I don't), that I fail to admit my wrongdoing (I do, though many white collar criminals maintain their innocence). Hence the cook's focus on whether I had a maid. I try to catch myself from doing the reverse, but I occasionally find myself falling into the same trap: judging a drug dealer from the hood or a border jumper from Mexico based upon stereotypes rather than the man as a person.

In my next post, I plan to "go deep" as they say here at RDAP, and look at how I'm really doing, what I'm really feeling. And I promise to stop writing about the chow hall.
Posted by Leigh Sprague at 11:38 AM