Not Exactly Dancing with the Stars

I tried to prepare myself for life behind bars before surrendering to prison: the lack of freedom, the bad food, the many rules, the aggressive inmates. I talked with former inmates, read prison message boards and watched America's Worst Prisons on cable TV, learning that I shouldn't cut in line and should sit with the white boys at dinner.

I thought I was pretty well prepared, or as well as a white-collar felon with no prison experience can be. But it turns out that I was not prepared at all, that once piece of crucial information was missing from all the advice I received. And what was this missing golden nugget? Much to my subsequent regret, no one told me that I should practice my dance moves. 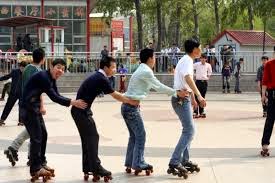 You see, almost each and every week I'm asked (ok, pretty much forced) to stand before 100 fellow inmates and wiggle my arms and shake my butt to the beat of "Don't Worry, Be Happy" or some similarly uplifting song.

Did I mention that this is in front of 100 inmates? All cheering and clapping and yelling "more, more, one more time!" And me looking like the world's biggest idiot. If this sounds like a nightmare, it more or less is. Except that in a real nightmare I'd be dancing naked. At least that's what I tell myself to make the reality a little less bad.

I suppose I should explain. Here at RDAP we have a daily meeting called the "Up Meeting". We do various things at this meeting, including serious things like informing the community about news, developments, program changes, etc. Former RDAPers who are being released from prison come to speak with us about their thoughts: what they gained from the program and how they plan to apply it to their life on the outside. In short, serious, useful stuff. 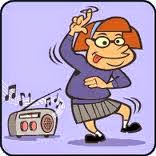 I suppose I should clarify. This isn't some prison version of the high school prom - no mass of inmates jiving in the rec room arm in arm. This isn't a conga line of men in greens or a group rendition of the chicken dance. This is a take-your-turn, individual style of dancing, akin to a ballet solo by the lead ballerina. Each inmate gets his day in the spotlight, his day to shine. Up in front of everyone. All alone.

If someone had told me before I entered prison that I'd soon be standing up in front of 100 inmates and putting on the moves I'd have told them they were crazy. Those who know me will immediately understand: this white boy really can't dance. I can feel the beat in my head, more or less, but somehow that doesn't translate into moving my hands and feet at the proper time or in the appropriate way. In short, I am a terrible dancer, the kind that should (and has, until this incarceration) stuck to wiggling in the crowd or crashing about in a mosh pit. I'm pretty much a realist, recognizing my dance limitations from an early age and pouring my energies into more fruitful pursuits.

My first attempt at prison dancing was pretty pathetic: a few wiggles and a huge blush of shame. But after that faltering first attempt my thinking changed. What the hell, I decided. Here I am in prison. I can't exactly sink any lower. So what do I have to lose? Compared to the humiliation of becoming a felon, the humiliation of public dancing is nothing.

So I decided to let it all hang out. And I did. I'm not sure what exactly you'd call my dance. Basically, it's a fairly unique agglomeration of random dance moves I've accumulated by osmosis throughout the four decades of my life: a bit of 50's style hands sliding on the knees, some 60's hippie swaying, a bit of 70's jive, even the arm wiggling of the chicken dance and the hands-over-the-head finale of Walk Like an Egyptian. 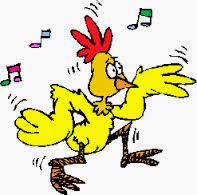 And you want to know the absolute strangest thing of all? My little dance, the worst dance in the history of the world - something more akin to the rain dance of some aborigines in the jungle than anything that might be recognized as modern movement - became the hit of this prison.

I'm now known as the inmate dancer. My dance is referred to at times as the Sprague dance, at times as the "dolphin". At least 10 times per day, inmates come up to me and ask me to show them my moves. When I walk around the grounds I see people imitating me. They cheer me on when it's my turn to dance. The roar is deafening. Last time around, I received a standing ovation. If there were a prison version of youtube, my dance would have at least 100 hits.

What I hope they're cheering at is an introverted guy making an effort to connect, to change, to break out from his shell, by showing the world (or at least this little sub-section of it) that it's ok to make mistakes, that we're not always perfect.

Because, I've realized, the only way I'm going to recover and become a better member of society is to break down the walls I built up and learn to dance to a new tune. Both literally and figuratively.