Making Fashion Out of Prison-Issued Garb 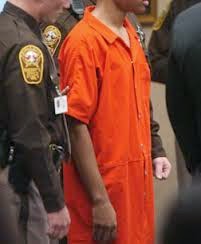 I never considered myself a particularly fashionable person. Not only do I value function over form, but I consider haute couteur a real waste of money. I have my own style - what might charitably be labeled "Target chic" - but it's more utilitarian and comfortable than anything else, with its emphasis on loose-fitting slacks and t-shirts and pullovers. Even in the old days during my lawyer interlude, I had to be dragged kicking and screaming into a tie and dress-shirt.

So while I'm not exactly a fan of prison-issued garb - the greens are drab and the lack of zippers (considered a security threat) annoying - the transition was not particularly difficult for me or my ego. In a way it's even liberating: there's no need to think each morning about what to wear. It's green khakis, green dress shirt, white t-shirt and black boots. Or nothing. My morning sartorial dilemna can be summed up as follows: Hmm, should I wear the faded green khakis today or the green khakis covered in white paints spots?

The weekends, however, pose a minor challenge: the dress code is relaxed and we can wear other clothes, so long as they're purchased at the commissary. This pretty much limits the field to gray sweats and shorts and sweatshirts and long-sleeve t-shirts, even gray and white long underwear are fair game. Despite the limitations, these variations present a welcome change from our week-day uniforms. Inmates, it turns out, are surprisingly creative: some wear their shorts low on their wastes, practically around their ankles; others wear long-underwear under their shorts. Some wrap shirts around their heads like bandanas. 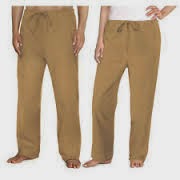 Then there's my usual weekend getup: gray shorts, white socks, tennis shoes and white t-shirt (untucked, of course, except in the dining hall, where proper tucked-in attire is mandatory). Basic, yes. But comfortable. And as good for lounging on my bunk as walking the track or doing yoga. The only addition I make to this standard getup is to tie a gray sweatshirt around my waist. Mornings are cool here, afternoons hot, and evenings cool again, so just as I did on the outside, I like to have a just-in-case layer around my waist to cover all eventualities.

Except that this outfit is considered by many inmates to be terribly outre and far too fashion forward for prison. Apparently - or so I've been told now a few too many times - the outfit is asking for trouble. Why? It's considerd to be snobby and preppy, the ultimate thumb-your-nose at the system approach of a white collar criminal. As an example, I was walking to my bunk just moments ago after circling the track. A neighbor of mine approached, repeating the words, "Really? Really? Really?" over and over again. I thought he was having some sort of a meltdown. 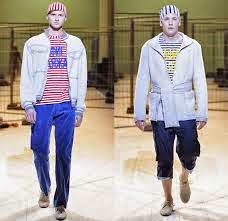 "Where did you go to school?" he asked.

"What does that have to do with anything?" I said without answering.

What else is there to say to that but "whatever?" In fact, that's just what I did say, although in a fashion compromise I threw my sweatshirt on my bunk before coming to write this e-mail. 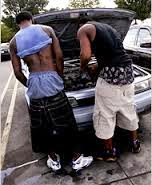 Although I suppose I can understand his point of view, I'm not quite ready to give up my long-sleeve backup. Not quite yet, anyway. It's just too practical and convenient. And considering that he was wearing, gray long-underwear under sagging white shorts, combined with shower shoes and white socks, I'm not sure I'm ready to take his fashion advice. Is a sweatshirt around the waist a sign of preppy overdo on the outside? I already can't remember.

Just for the record I have never ever ever ever considered myself a prepster, even during my dark college fraternity days.
Posted by Leigh Sprague at 8:23 AM