Most evenings I anxiously await mail call in the hope that I'll receive a letter from friends or family. Barring that, I'll settle for the latest issue of New Yorker or Vanity Fair, the two magazines I subscribe to. This week, however, the mailman has been the bearer of little but bad news. Bad financial news, to be exact. It's not, to be sure, that I was expecting good financial news: haven't had much of that in quite some time. But this news truly takes the cake.

On Monday, I received a notice from the IRS that I owe an additional $20,000 in back taxes. In my previous life, even before I stole money from the oligarch, this would have been little more than a pittance, a mild nuisance to be cured by sending a check the next day.

Then on Wednesday, just as I was recovering from the shock of the IRS bill, I received a notice from the Justice Department. This notice was formatted the same as a typical bill, just like the one you might get from the gas or phone company.

We've all seen them: a sheet of paper with a perforated section at the bottom to be detached and enclosed in the provided envelope together with a check for the requested amount. Even the language was the same: please pay this amount in full immediately, and in any event not later than the indicated date.

The only thing that set it apart from the typical utility bill was the amount. Instead of the usual gas or electricity bill of $50 or $80 or maybe even $100 in a particularly bad month, this bill was in the amount of $1,416,360.85.

I couldn't help but laugh. Then cry.

First, I should state right up front that no, this is not a typo; no misplaced comma or period here (unfortunately). This is the amount I owe in restitution, the difference between what I stole from the oligarch and what I returned to him; the amount our considerate federal government intends to collect from me over time and return to that billionaire Russian, sanctions notwithstanding. So the amount itself - though large and depressing - was not a surprise. I fully expected to have this humongous debt, this constant reminder of my crimes, hanging over me for the foreseeable future (if not the rest of my life).

What surprised me was the unequivocal nature of the request itself: please pay NOW! As if I have that amount sitting in my bank account. As if the government doesn't already know of my dire financial straits. As if a repayment plan hasn't already been arranged.

While in prison, I pay $25/month toward restitution, an amount almost (but not quite) covered by my generous kitchen salary. At this rate of repayment, I've calculated, it will take me only about 4,000 years to repay the full amount. Unlike the restitution invoice, at least the IRS notice took account of reality: the response has a box that can be checked stating that I am currently unable to pay.
Unfortunately, not only do I not have any money in my checking account but I don't even have a checking account. Or a savings account. Or any account at all. You see, my actions and my incarceration have left me more-or-less destitute: much more in the red than in the black.

The funny thing is that in prison it's not that much of an issue. There are many here worse off than me and my basic necessities - a roof over my head, food on my plate - are provided free of charge by our kindly government. And the extras - e-mail, phone, commissary treats - while not exactly cheap, are covered by considerate relatives.

But what comes next - my eventual return, penniless, to the real world - is an endless cause for concern, despite the fact that it's still almost two years away. While I dream of little else of rejoining my family, rejoining the world, I can't help but stay up the occasional night worrying about how I'll support myself and my kids. 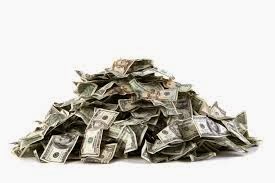 The depressing thing is that when I tell people here on the inside what I did - and I'm forced to do that nearly every day here in the treatment program - they can't believe I'm broke.

Many of them seem to seriously believe that I have a few million buried somewhere in a hole in the ground. Or a Swiss bank account. Either that, or they believe my protestations that I'm completely broke and consider me the biggest idiot in the history of the universe. Inmates tend to be a money-obsessed lot, and the vast sums that passed through my greedy hands are an endless source of fascination for many of them.

That, however, is a topic for further exploration in some future post. As for now, I can't wait to see what comes in the mail next week.
Posted by Unknown at 4:09 PM